Willard Mitt Romney’s biggest political vulnerability as a presidential candidate is that he passed Obamacare before President Obama did. After Romney passed the basic equivalent of Obamacare, the Republicans made a seismic shift to the right, making Romney’s golden child look like a shameful bastard child.

As a result, the Father of Romneycare and Grandfather of Obamacare has essentially three choices for managing the angry paternity claims:

MAN UP AND EMBRACE THE KID. Romney could explain why he and other Republicans were right to embrace the private sector health insurance reform model, which, by the way, is dramatically outperforming Rick Parry’s model (Massachusets has 4% uninsured, Texas is six times higher, with 24%).

CONFESS AND REPENT FOR FATHERING A BASTARD. Romney could admit the kid is his, and confess to the Tea Party that he made an unforgiveable error in fathering the reform model that is producing the best health coverage rate in the nation. (The shame!)

GO DEADBEAT AND MAKE SHIT UP. Or Romney could fabricate DNA evidence in an attempt to disprove any common lineage between Obamacare and Romneycare.

Romney has decided to go the fabrication route. In the debates this week and last, he trotted out a series of ridiculous Obamacare-Romneycare differentiators, such as:
END_OF_DOCUMENT_TOKEN_TO_BE_REPLACED 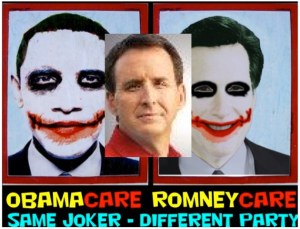 Hardly anyone has noticed yet, but yesterday a Minnesota blogger may have put a fatal dagger in former Minnesota Governor Tim Pawlenty’s hopes of winning the Republican nomination for President.

True North’s Andy Aplikowski is the modern-day Woodstein who reported a blockbuster yesterday that should make it much more difficult for Pawlenty to win the hearts of the hard-core right-wing activists who dominate the Iowa Republican Party caucuses.

Much worse. Much, much worse. Once upon a time, it seems Pawlenty wanted help thousands of Minnesotans get health coverage for their families. I’m not kidding. There’s tape.