The Gray Lady began selling herself Monday—she sold an ad on the front page. The front page has long been considered the one place in a newspaper you would never allow advertisers to contaminate. And now our nation’s newspaper of record, the New York Times, has committed an act comparable to Joseph Pulitizer’s running sensationalized news in order to increase circulation, a trick as awful as “putting a hula dancer in front of the church.”

Now it turns out that the New York Time’s first ad wasn’t trashy or anything; it was a sleeper, in fact, for CBS programs. And the Times could make some serious found money through this move, perhaps as much as $29 million if that same ad space is sold every day for one year.

Considering the New York Times has a $400 million debt payment due in the spring and is currently considering mortgaging its building to raise $225 million, that $29 mil seems like a drop in the bucket.

But let’s look at the positive here, shall we? We still have a print edition of the New York Times, after all.

(That front page following Obama’s election will not only be collectible, so might the entire newspaper-as-species. Consider:

“Yes, little Ellen. A newspaper. Back before we became the United States of Chinamerica, we used to make them out of dead, squashed trees. Trees. Remember when grandma took you to the Treeseum to see that one tree? Well anyway, this was a newspaper and smart people read one every day. Then they threw it away and bought a new one the next day.”

So, maybe the New York Times had no choice but to do what it did. But I can’t help but thinking that by doing it for $75,000 on weekdays and $100,000 on Sundays, the Gray Lady has finally provided us with the answer to the age old question, “We’ve already established what you are. Now we’re just dickering about the price.”

Is it possible for Governor Pawlenty to raise “fees” by about 21% while continuing to brag about keeping a no new “taxes” pledge?

As Minnesota 2020 notes: “While some fee increases may be necessary to pay for increased costs, it is clear that fee increases are also being used to back fill a hole in the state budget.”

Call it a fiscal mullet. Cosmetic constraint in the front, unrestrained growth in the back. 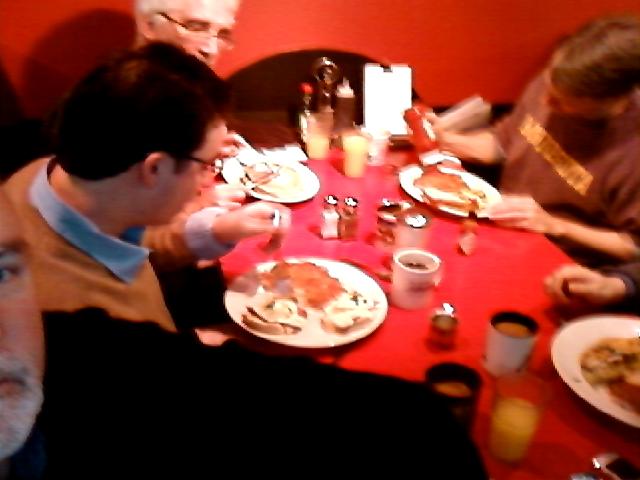 A majority of your hosts dragged their asses out of bed this morning to breakfast at the Highland Grill in what has become something of an annual tradition: we get together to assess the state of the Crowd, to gossip and to remind each other what we look like (contrary to the perceptions of some, we don’t often sit around the SRC newsroom plotting each twist and turn of our writings.  We do, however, have  a Bat Cave.)

We didn’t reach any great conclusions except that we still enjoy getting together – virtually and occasionally in person – and we’ve really, really enjoyed the conversation and dialogue that you – our readers and posters – have brought to this forum since 2007.  Thank you one and all and please keep it – and yourselves – coming.